Innovating with data: the web app for Ecosistema Urbano

The Ecosistema Urbano report is a work created by Legambiente in the 1990s and carried out in collaboration with Ambiente Italia and Il Sole 24 Ore. It is an authoritative study based on the environmental data of cities that aims to create reference indicators for the construction of rankings of the environmental performance of municipalities. Legambiente defines it as a “thermometer of sustainability”, precisely because the tool is designed to measure the effectiveness of the actions of the Public Administration for the improvement of what is identified, in fact, as “urban ecosystem”. The national survey is conducted with questionnaires and interviews addressed to the 105 municipalities of provincial capitals and produces a work of great value for the administrations of the whole Italian territory.

In the wake of what has been carried out at the national level, Legambiente Umbria has decided to decline in a regional report Ecosistema Urbano involving the main cities of the Umbria Region, which are the 15 municipalities with a population over 15,000 inhabitants. On the occasion of the publication of the second edition, Legambiente Umbria has decided to entrust gisAction with the development of an interactive digital platform to facilitate the access and dissemination of data.

The report is based on the identification of 18 environmental indicators that cover the six main issues related to the sustainable development of a city.

The indicators are built from open data published by public agencies and institutes: Istat, ISPRA, ACI, CURIT, GSE, AURI, ARPA Umbria, Umbria Region, Joint Research Center. The need of Legambiente Umbria was to find a solution that would facilitate the understanding of the data, represent them graphically and make them navigable; a solution capable of transforming data into information.

The solution designed for Legambiente Umbria is a web app configured with ArcGIS Experience Builder, the Esri tool that enables the creation of applications without writing code, fully customizable and configured for optimal viewing on mobile devices or desktop.

The web app presents a navigable map showing the data of the general ranking of the municipalities: the map is the most functional data visualization tool for a report examining some areas of the regional territory and, at the same time, it offers an immediate overview of the performance of the municipalities. 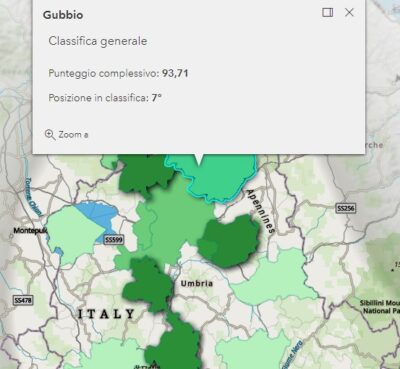 From the home page it is possible to access two sections: the first with the indicators divided into six macro-categories and thematic maps for each indicator. The other section shows the general ranking and a report card for each municipality, with a detailed analysis of the context, data differentiated by year and graphs for data visualization.

The solution presents a high degree of customization in order to better represent the contents of the report; in particular, an open source library for Python has been integrated into the application, allowing to develop interactive and engaging graphics in Jupyter Notebook environment. 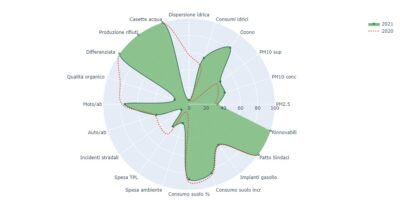 Sustainable development finds its daily construction logic within the local dynamics; the efforts of the single actors intervening on the territory contribute to trigger virtuous circles and to trace the way for new virtuous interventions, for this reason the Ecosistema Urbano report represents a boost to improve year after year. The innovation brought by gisAction to the work of Legambiente Umbria responds to the challenge posed by President Maurizio Zara:

“We believe that it is essential to make data public and, above all, usable. Creating a widespread awareness of sustainable development issues requires precisely this step, or the involvement of non-experts, citizens who live and take care of the territories every day.”

For the non-profit world, more and more, it is necessary to acquire awareness about the importance of proper use of data and effective communication of projects. 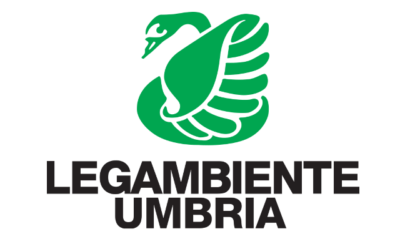 Legambiente Umbria is the regional section of Legambiente, the principal ecological association of Italy

Go to the Web App

Look all our projects.
Let’s discover what we can do for you. COntact us!